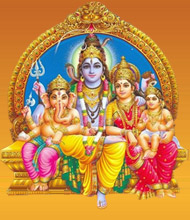 Mysticism has three parts: mantras, yantras and tantras. They are inseparable. Mantras are mystic sounds. Yantras are mystic symbols that pull energy from cosmos. Tantras are the mystic work done to alleviate problems. In yantras, symbols like dot, line, circle, traingle, rectangle etc. are used to drag positive energies. Sri Yantra is the most powerful of all yantras. Mathematicians are exploring Sri Yantra for the secret mathematical formulas that it contains.

Yamanaath traayathe ithi Yantraha  Yantra is one which protects the people from troubles. We can understand Yantras as geometrical shapes like straight lines, curved lines, triangles, circles, etc which are interlaced in certain ways such that they produce different types of energies.

Since gods are different forms of energy, all most all ancient Hindu texts agree that the Yantras represent the body of gods where as the mantras should be taken as praana (life) of gods. Hence all Yantras will have mantras associated with them. To invoke the power of Yantras and mantras, we should adopt certain rituals (or procedures) called Tantras.

Dot, the supreme soul: If we imagine a plain surface as Universe, a dot placed on the surface represents the God or supreme soul. Like God, a dot does not have any direction and is indefinable. If we extend the do, it pervades the entire Universe in all directions. So, a dot represents Gods energy concentrated at a place.

Straight line, the human soul: When we draw a straight line, it divides the surface into two parts. Here, dualities like Paramaatma (super soul) and Jeevatma (human soul), happiness and sorrowfulness, day and night, heat and cold, man and woman, etc. will come into the picture. In reality, these dualities are the two sides of the same coin.

For example, happiness and sorrowfulness are the different forms of emotional state of the mind. Heat and cold are two forms of the thermal energy and man and woman are two forms of the material body. So, a straight line represents Jeevathma (human soul) which is the immediate form of the super soul.

Circle, the mind: When we make a circle around us, we are shunning ourselves from the outer space.

So, a circle represents selfishness and closed mind. A circular object can move easily and not stable like our mind. So, a circle in Yantras is representative of human mind and ignorance of outside world. It also represents protection of our energies by not spending them for others welfare.

Triangle, the energy: A triangle is formed by joining 3 straight lines. It forms 3 vertices. According to Physics, any pointed end works like a condenser to store energy and at certain conditions to release energy. Thus we should understand the vertices of the triangle as energy reservoirs.

When we combine the upward and downward triangles, the male (Siva) and female (Shakti) energies are combined to produce children.

If we make a Yantra in this way, it is called 'Shatkona' since it has six vertices. It is also called Skandha Yantra since it represents the child of Siva and Shakti is Skandha (or Subrahmanya or Kartikeya). Hence this Yantra is useful to childless couples to get children. Because, this Yantra is a combination of the two prime forces, it can also be used to increase resistance power in the body and to get protection from any ill health.

Square, the physical body: A square will have four corners and does not move easily.

It firmly places itself on the ground. So, a square or rectangle represents stability and matter. It represents earthy element with its four corners representing the four directions of the earth. Since our physical body is composed of matter, it also represents the physical body of a human being.

Shapes like petals of a flower represent the chakras in our body which represent different types of energies. Using these energies, we can perform daily routine works. When these energies are refined, we can attain super natural powers also.

Sri Yantra is the master of all Yantras, since all other Yantras are said to originate from Sri Yantra. Sri means wealth and prosperity and Yantra means instrument. Sri Yantra is shown in the top right corner of this page. It is composed of 9 interlocking triangles, 4 triangles pointing up and another 5 triangles pointing down. A total of 43 triangles can be seen which are formed from the overlapping of these 9 triangles. The inner most triangle has a dot (bindu) in the center. When Sri Yantra is constructed in 3 dimensional form, it is called 'Maha meru'. Sri Yantra is used in the tantric culture of Hinduism.

We start from the outer side of Sri Yantra and proceed towards its inner details. The outer side of Sri Yantra contains a square with 8 sides. The square represents the physical body. The 8 corners of the square are the 8 deities, starting from top in clock-wise direction, Kubera (North), Isaana (North-East), Indra (East), Agni (South-East), Yama (South), Nirruti (South-West), Varuna (West) and Vaayu (North-West). These 8 deities are protectors of our physical body. We can say our body is composed of these 8 elements. Any excess or deficit in one or more of these elements will lead to diseases and destruction of the physical body.

The earth square has 3 layers at its outside. These layers represent Tamah (baser qualities), Rajah (anger and desires) and Satwah (softness). These 3 qualities are always attached to a human body.

From this earth square, if we move towards the center of Sri Yantra, we see 3 concentric circles. The outer circle represents Manah (mind), the next one represents Buddhi (intelligence), and the innermost circle represents the Jeevatma (human soul). The significance is this: our wavering mind should apply its intelligence and find the ways to understand the soul. Once we get the awareness of the soul in our body, we are ready to tap the subtle energies of our body.

Our body is a vast reservoir of different types of energies like light, heat and sound. The numerous nerves of the human body circulate these energies and are finally connected to brain through the spinal cord. These nerves meet in bundles at spinal cord region and are called chakras. We can imagine chakras as reservoirs of energy. These chakras are represented in the form of petals.

The 16 petals of Sri Yantra represent Kaama (desire), Buddhi (intelligence), Ahankaara (igo), Sabda (hearing), Sparsa (touch), Roopa (sight), Rasa (taste), Gandha (smell), Chitta (mind), Dhairya (courage), Smirtya (memory), Naama (name), Beeja (fire), Aatma (soul), Amrita (water) and Sareera (body). These are the elements (or different form of energies) through which our Jeevatma (human soul) understands and interacts with the outside world. We can attain mastery over these elements by meditating and balancing the chakra energies in our body. Even a normal human being then gets some super natural powers called siddhis.

There are 8 siddhis represented by the 8 petals of the inner circle. They are Anima (smallness), Laghima (bigness), Garima (heaviness), Mahima (creativity), Easatva (godliness), Vasatva (subjugation), Praakamya (fulfilling the objective) and Iccha (willfulness).

Now we come to the interlaced triangles. Each triangle is formed with 3 straight lines and hence there will be 3 vertices. These vertices denote Jnaana (Iym), Kriya (Hreem) and Iccha (Sreem). There are 4 upward triangles representing the Siva (the male force) and the 5 downward triangles represent the female force, called Shakti (the female force). When 4 upward and 4 downward triangles are taken, they are balanced. They represent that this entire Universe is emerged from Siva and Shakti. The one remaining downward triangle represents the Mother Nature. We live in this Nature and feel that this is the only real world. This feeling is called Maaya (ignorance). Once we come out of this ignorance, we will be able to understand Siva and Shakti.

There is a dot (bindu) in the center of the Sri Yantra. Sit with your eyes closed and and start visualizing a dot in the top centre of your head. This place represents the sahasraara (crown chakra). When we concentrate on this crown chakra, we will be able to come out of Maaya and connect our Jeevathma (bodily soul) to all pervading Supreme soul. This is called samaadhi (dwelling in the God). Thus, Sri Yantra becomes an instrument for mankind to unite into the Supreme soul.